In an unlikely place in Boston, Massachusetts street art murals can be found.  Underground at Ink Block is an urban park that is below I-93 highway.  As you walk through the park cars zoom by overhead unaware of the art below them.  A space that was once useless and dark is now bright, colorful and an inviting place to visit.

This park beautifully connects the South End with South Boston neighborhoods with landscaped paths.  The park is multi purpose with walking/biking paths, parking lot,  a dog park and great street art.  Take a fitness class, go for a bike ride, walk the dog or sit and relax.  There are even pop up bars and dining open in warm weather.

“Hoxxoh’s work isn’t about the ebbs and flows of time eventually determining whether our existence will stand to be recognized, but instead serves to show that time in itself is a beautiful energy meant to be marveled at. His works represent what happens when we let go of our control of time and let its predetermined course take control. Spheres of life are on display, illustrating the motions of space and time working in unison to create natural order. His paintings depict time as a sweet ride that flows by mixing spontaneity with precision. The physical presence of time displayed in its most natural form. ” – Hoxxoh

“He developed a vision of beautifying Boston purely by instinct, experiencing his “calling” as a young man, a child of the HipHop golden age. The need to place social consciousness in HipHop culture is a driving force behind Problak’s creativity.” – Problak

“Dedicated himself to incorporating the various techniques of classic art into urban art, with a specialization in murals. Lorenzo Homar, Jose Alicea, Rafael Tufino, Rembrandt, and Joaquin Sorolla, are just a few of the influences one see’s in the line work, color treatment and poetic imagery of his pieces.” –  Don Rimx

“Largely inspired by multi cultural influences, Marka27’s art has served as a reflection of his varying interests.  Beginning with iconic musical (and specifically hip-hop) figures, Marka27’s passion to infuse empathy into his art gave way to birthing magnificent and politically-charged masterpieces, some of which still grace both Boston’s and Los Angeles’ city walls today, as well as San Francisco and Montreal, Canada.” – Marka27

“IMAGINE (aka Sneha Shrestha) is a Nepali artist who paints mindful mantras in her native language and meshes the aesthetics of Sanskrit scriptures with graffiti influences. Being the first to mesh Nepali Alphabets with American graffiti, she has shown her work in several exhibitions, commissioned works and public walls around the world including Boston, San Francisco, Bali, Istanbul, Geneva and Copenhagen.” – Imagine

“Exhibiting within both the public and private spheres and creating large and small-scale pieces, Percy merges the worlds of classical painting and graffiti techniques boldly pushing the boundaries of his work, without being confined by stylistic stereotypes” – Percy Fortini- Wright

“Although his work has evolved, it is still recognizable as his own- with bright colors and refined shading and complex yet simple approaches to his medium and surfaces. His trademark “eyes” always find a way into his pieces . At times Vyal includes these eyes in his work as an spiritual offering and “praise” to one of his most cherished senses. ” via Street Art Theory   VyalReyes

“As an artist, designer, and lover of life, Upendo’s inspiration is drawn from the streets, sports, music, fashion, friends, political and social issues, pop culture, cartoon characters and his favorite food- the hamburger.”  – Upendo

“Thy Doan is an independent designer and letterer currently based in Boston. She was born and raised in California and graduated in 2007 from Cal Poly in San Luis Obispo with a BFA in Art & Design. ” via Street Art Theory

Street Theory Gallery and Undergound at Ink Block organized local and internationally known artists to create 9 new murals.  Over 100,000 square feet of wall were transformed into works of art.  This once left behind space now draws people out to walk through the colorful park.  Be sure to follow the rainbow colored path to see all the murals. The park is 8 acres and the potential is incredible, this is just the first phases of the park.  We can’t wait to see what it is to come!

Guest Writer: Cathy Merrifield of Nothing But New England.  A couple of outdoor loving, curious souls always on the look out for fun things to be seen and experienced in their our “Back Yard”…New England. Frank and Cathy share the best of New England as only locals can, they know locals know best!

Thank you Cathy for sharing this great street art.  Check out more street art in New England from Nothing But New England! 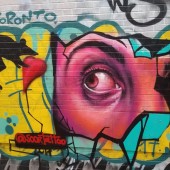 Street Art Chat showcases art and artists from all over the world. If you would like to share street art, please feel free to submit your material to be featured.

Where to Find Street Art in Rockland, Maine

Pilgrimage to the Street Art of Bethlehem