Street art has a prominent role in New York City’s history, and has been immortalized in numerous books, movies and television shows. But it’s come a long way from the days of subway car graffiti and being outlawed as vandalism. Today, street artists have tremendous notoriety with commissioned works in prominent spaces. Many still produce provocative pieces with political and social messages, but street artists now have large followings that have allowed them to move seamlessly into the commercial art world. So as you walk around the city, consider that you might be looking at the work of the next Basquiat!

New York City is home to many incredible street artists, but it also attracts talent from all over the world. While there are known street art hubs like the Bushwick Collective and Coney Art Walls, there are still many pieces to be discovered in and around Manhattan. Street art lovers can spot great works all over the city, but the rotating outdoor gallery in the trendy SoHo and Lower East Side neighborhoods is a fun place to start.

Here are some locations in those neighborhoods that are guaranteed to yield some amazing street art finds:

The Bowery Wall on Houston Street isn’t just a famous site in New York City, but one that is known throughout the street art world. It has housed the work of such greats as Keith Haring. The four-story space is owned privately by Goldman Properties, who has dedicated it to public art. The mission is to offer space to

“established and emerging street artists from the United States and around the world who have a powerful message of hope, possibility and inspiration to young and old.”

Mural by Logan Hicks from September 2016

Mural by PichiAvo from April 2017

Located just a block away is the First Street Green Art Park, a community garden and open art space. In a wonderful example of neighborhood revitalization, a derelict building lot was re-purposed into a lively public space. The park features several walls adorned by works of many street artists.

On the opposite side of Houston Street, you’ll find a space occupied by trendy retailer Rag & Bone. The west wall of the store facing Elizabeth Street is another spot you’ll always find fresh street art from famous artists like Buff Monster and James Goldcrown (of Love Wall fame).

Mural by Marc Maniac from October 2016

Mural by Kai Aspire from October 2017

From Houston Street, a short walk down Lafayette should also yield some street art treasures. One of our favorite finds from 2017 was a piece by South African artist Sonny. In partnership with Discovery Communications, the artwork sought to bring awareness to Project CAT, which stands for Conserving Acres for Tigers. Project CAT aims to conserve nearly a million acres of protected land on the border of India and Bhutan to ensure a healthy habitat for tigers.

Mural by Sonny from August 2017

Another stretch with a number of stunning murals is Allen Street. The New Allen is an art foundation created by Franco Noriega and Milan Kelez that brings together street artists from around the world to transform Allen Street into the city’s premiere street art gallery.

Mural by Joe Miller from December 2017

But besides these prime locations, simply wandering the area you’re likely to come across many wonderful pieces. Just remember it could be hiding anywhere: don’t overlook entryways, and always remember to look up!

Mural by Tom Bob from November 2016

Art by Invader from December 2017

Guest writer: Lynn and Justin of Mad Hatters NYC. We blog about our adventures in New York City as well as our escapes from it. New York City is a year-round destination and we love featuring everything it has to offer, like art, seasonal activities, and of course, food. But every once in a while our spirit of exploration takes us beyond the city limits, and we love sharing that too. We hope to inspire more seeing, more doing and more eating through our exploits. 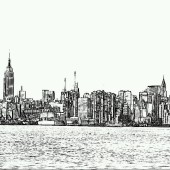 MAD HATTERS NYC - A NYC Lifestyle, Travel and Food Blog - A local blog that hopes to inspire more seeing, doing and eating in NYC and beyond

The Best Street Art Around the World

Lose Yourself in the Street Art of Albania

The Story of the Flappy Bird Redo

Marco Réa: The Evolution of an Artist and How He Creates Master Pieces from Chaos